As summer comes to an end and fall awaits just around the corner, many people have transitioned back into their day to day routines. Gone are the days of summer freedom, “vacation mode” and long days of fun in the sun. Each fall, as Americans return to work and school, we are reminded of what transpired on a sunny day in early September 2001. Eighteen years have passed since the day most Americans can never forget, especially those living and working in or near New York City.

Now, Patriot Day is observed on September 11, each year in the United States in memory of the lives lost in the attacks that occurred on the morning of September 11, 2001, typically referred to as 9/11. Commonly, we ask others “where were you?” or “how old were you when it happened?” These questions unite us in a unique shared experience. What unites us together as a nation, as individuals, peers and colleagues, is shared experience. To observe the eighteenth anniversary of 9/11, we sat down with a few of our employees from the New York City area to talk about their unique experiences. Check out their interviews below:

“I remember I was in Pelham, New York, that morning, grateful that I wasn’t downtown. I remember that our warehouse at the time in Secaucus, New Jersey, was located with a bird’s eye view of downtown Manhattan. If you looked out the back door where employees came in, you basically could see everything when the planes hit the towers. At the time, I couldn’t comprehend the concept of them falling. I thought for sure that it’d be bad for a short while and then it would be built back up like a lot of construction in New York. To me, the towers falling was just inconceivable. Through the horrors that many New Yorkers suffered that day and the many after, I do remember a noticeable change in how we related to one another. In the weeks and months following 9/11, people were just kinder to each other and I feel that way every year since.”

“That morning was a beautiful, sunny morning. I remember, because the weekend before had been awful with rain and heavy storms. I had an appointment with a customer on the Central Parkway in Queens. As I made my way to them, I hit a lot of traffic and called my contact to let him know I’d be a little late. As I spoke on the phone with him, I hear on the radio that a plane hit one of the towers. Shortly after, I arrived at the office for the meeting and as I rounded the bend, I could see one of the towers on fire. On Long Island you have mostly volunteer firefighters and this was a big call for help. All the volunteers were heading past me to Manhattan and my car was splattered with water and mud from the rain we had the night before. As I was walking into the building, I could hear the fighter jets being mobilized across the river from us, zooming so loudly people walking in were ducking. I got into the building and the vice president invited everyone to the penthouse and that’s where we saw the second tower fall. Every year since, I reach out to the account manager that I met with that morning, even if it’s just to say that we’re thinking of each other.”

“On the morning of September 10, Rachquel Young and I had an early meeting at a hospital in Brooklyn. It was about 9:30 a.m. as we made our way across Manhattan towards the Westside Highway up towards the Bronx. It was a beautiful sunny day and I had the sunroof open as we drove through traffic. I’ve made this same trip many times but somehow, that morning, I made a wrong turn and found us heading downtown. Before we knew it, we were stuck at a traffic light directly below the two towers. Rachquel had never seen the twin towers up close and as we looked up out of the sunroof, we could see so far up where it looked as if the two towers came together and appeared as one. The sun was gleaming off the towers and I remember telling Rachquel that no matter how many times I see these towers, it’s like looking at them for the first time…and 24 hours later, they were gone forever.”

Marchese maintains, “I remember everything from September 11, as though it were happening in slow motion. At the time, we didn’t have cable in the office so it wasn’t until I finally got home two days later that I could sit and watch in horror what was actually happening all around us. Still to this day, when I cross that bridge going over the Long Island Sound, I grab a quick glimpse of the city skyline. Instantly, I remember the smoke cloud that hovered for weeks over lower Manhattan and for just a few seconds, that somber feeling stirs inside of me. Every person that was in or around our city on 9/11 has their own personal story embedded in their heart. Eighteen years later, and the memories of that day and the months that follow still remain as clear as the sky was blue that morning.”

“My experience is a little different because it was really up close and personal. In 2001, my husband was a volunteer firefighter. His company was one of the few volunteer companies dispatched to Ground Zero because of the equipment they had. He and my brother-in-law were on their way before the second building fell. My child was five months old at the time, so having my family down there was a lot to deal with. It hit us beyond everything on the peripheral that happened that day and it doesn’t go away, even almost 20 years later. It stings a little less, but it’s still there. Now, my husband actually works for the fire department he volunteered for back during 9/11. Bringing this to present day, everything that happened recently with the 9/11 funding discussions were very close to my heart.”

Neubert continues, “Obviously, it was such a horrible event but something good that came out of it was that it brought people in New York together, we became kinder and nicer to people on the street and in schools, from our service workers like fireman and police officers to hospital workers and healthcare professionals; everybody was finally recognizing how important those roles are. It shined a light on the service industry and how much we needed them not only September 11, 12 and 13 but for the many months after and every day since.” 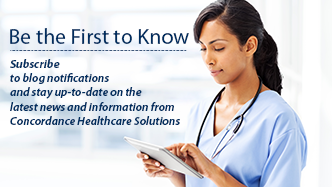 With an initial announcement made in late 2015, Concordance Healthcare Solutions was officially ...

Many locations in the United States that saw a high number of coronavirus infections early on, ...